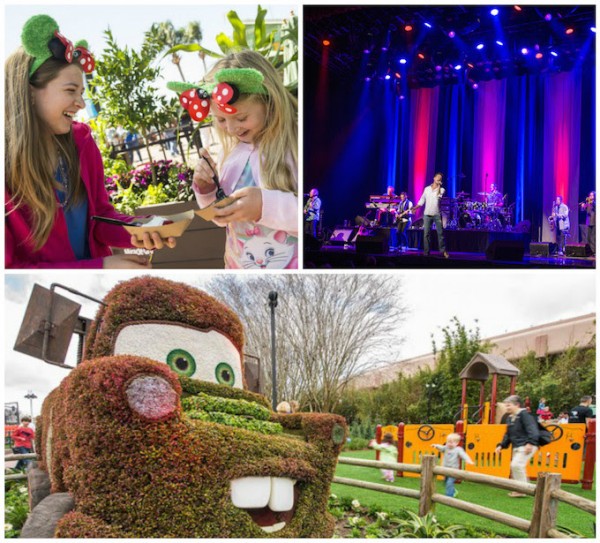 At the 2016 Epcot Flower & Garden Festival, new culinary creations at the festival’s Outdoor Kitchens will introduce fresh variety and flavor to the offerings at a record 13 festival kiosks surrounding the World Showcase Promenade.  This year, La Isla Fresca takes you to the Caribbean for authentic bites, including Jamaican Braised Beef with Pigeon-Pea Rice and Jerk-Spiced Grouper or Chicken with Mango Salsa. And, at the new Cider House, a Field Greens salad with greens harvested at The Land pavilion, heirloom apples, Stilton cheese and dried blueberries will pair well with blueberry hard cider from Plant City, Florida.

At the park entrance, the first-ever Huey, Dewey and Louie topiaries will feature floral interpretations of Donald’s mischievous nephews inspired by the 1943 Donald Duck comic book called “The Victory Garden.”

And, as in previous years, each weekend at the Festival Center, you can dig in for a complimentary hands-on Gardening Seminar experience as they get tips from experts on a broad range of topics.

Performances are at America Gardens Theatre at 5:30, 6:45, and 8 p.m. every Friday, Saturdayand Sunday of the Festival.