MousePlanning.com June 24, 2011 Non-Disney Theme Parks 0 Comments
Last week I had the opportunity to visit Hershey Park with my family and a large group of close friends. Overall, I felt that Hershey Park was a really good theme park that was well maintained, clean, and fun. Despite my status as a Disney Parks Fanatic, I was still able to enjoy my time at a park that doesn’t quite measure up to Disney theme park standards. In fact, I believe that my knowledge of the details of Walt Disney World made me appreciate Hershey Park even more than the average Hershey Park guest.

Take, for example, the carousel at Hershey Park. The first thing I noticed is that it was made by the Philadelphia Toboggan Company in 1919. This is the same company that manufactured what is now Prince Charming Regal Carousel in the Magic Kingdom. (That carousel was manufactured in 1918.) I was able to appreciate the fine craftsmanship of the wooden horses and could clearly see that the Hershey people do a great job maintaining those gallant steeds even if they don’t do it as frequently as their sister horses in the Magic Kingdom. 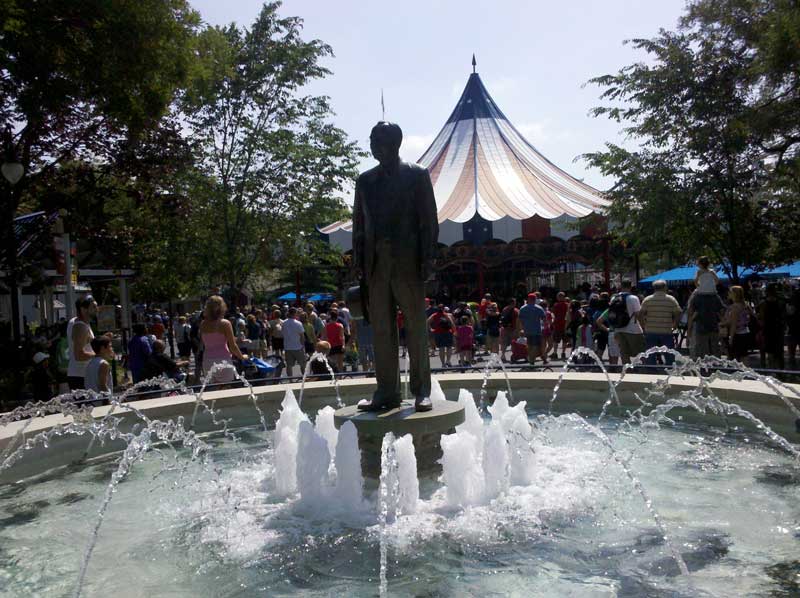 There is one area that I feel the need to speak out about. One of the reasons Walt Disney wanted to build Disneyland was so that there would be a place where parents and children could enjoy their time together. This philosophy is integral to the Disney theme parks, and although I’ve been aware of it for many years it took this trip to Hershey Park to really open my eyes to just how important that is. I have a family of six and the age range between my oldest and youngest children is over ten years. Other than the aforementioned carousel, I couldn’t think of a single ride at Hershey Park that we could all ride at the same time and enjoy. While there were plenty of “kiddie” rides for the little ones and a wide range of coasters and amusement park and water park rides for older children, teens, and adults, more often than not someone was left out due to being too big or too small, or too bored of a ride or too scared of a ride. When I looked into it more closely, 47 out of 63 rides have some kind of height restriction. Compare that to the attractions at Magic Kingdom. There are only 7 attractions with height restrictions — Splash Mountain (40”), Big Thunder Mountain Railroad (40”), Space Mountain (44”), Stitch’s Great Escape (40”), Seven Dwarfs Mine Train (38″), The Barnstormer (38″) and the Tomorrowland Speedway (32”). What a difference!

One other thing that really struck me was how differently I reacted to the roller coaster experience. When I get on to the Rock ‘n’ Roller Coaster at Disney’s Hollywood Studios, I love going from zero to sixty in 2 seconds and going full speed into loops and inversions. I keep my eyes open and try to catch every sight and l love the music being blasted into my ears.  At Hershey Park, I got on a roller coaster called Storm Runner, which blasts you from zero to seventy in 2 seconds. I was all excited until the vehicle went over the first loop and I found myself closing my eyes. Without anything fun to look at except ground and sky, and with nothing to hear but the screams of the other passengers, I just didn’t find myself having any fun. Lest you think it was fear, let me assure you it was not. I had similar experiences on the other roller coasters I rode that day, some of which were pretty tame. This probably says a lot more about me than it says about the quality of the roller coaster, but I found it interesting all the same.

Finally, I will leave you with something I found that left me deeply disturbed — Disney Copyright Infringement!