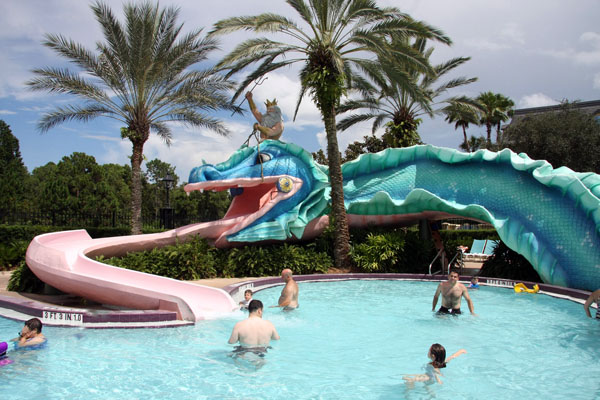 Out of all of Disney’s Moderate Resorts, my personal favorite is Port Orleans – French Quarter.  You probably don’t notice, but I have to fight the habit of just calling it “Port Orleans Resort.”  That was the original name of the resort back when it opened in 1991.  It’s sister resort, Disney’s Dixie Landings opened early in 1992.

About ten years later, for some (probably ridiculous) reason unknown to the public, the name of the resorts were changed.  Dixie Landings became Port Orleans – Riverside, and Port Orleans became Port Orleans – French Quarter.  As someone who still clandestinely refers to Epcot as EPCOT Center, and Disney’s Hollywood Studios as MGM-Studios, I obviously have trouble letting go of the original (and often better) names and concepts on Disney property.

So what makes me love Port Orleans – French Quarter over Port Orleans – Riverside?  I will admit that, as a Disney Vacation Planner, I give Riverside very high marks for it’s Ol’ Man Island swimming pool & water play area.  And some people lament the lack of a table service restaurant at French Quarter.  But unless you’ve got a family of five, I think that French Quarter is the best place to stay.  Why?  Here are five reasons:

1. Port Orleans – French Quarter only has about 1,000 rooms, which makes it half the size of Port Orleans – Riverside, and much easier to navigate.  There are no long walks to the lobby.  And even when it’s full, it’s still not as crowded as Riverside.

2. There is only one bus stop.  Even on the rare occasion when only one bus is servicing both resorts, French Quarter gets picked up first AND dropped off first.

3. The Doubloon Lagoon pool is still pretty nice, even if Ol’ Man River wins in an arm wresting contest.

5. You can still share all the pools and activities at Riverside if you want to.  If you really need a table service restaurant, you can walk over to Boatwright’s.  (Then stop by the River Roost Lounge to see YeHaa Bob!)

on your next visit to Disney World?