The Sorcerer’s Hat at Disney’s Hollywood Studios will pull a vanishing act next year!

“The Sorcerer’s Hat at Disney’s Hollywood Studios will no longer be of any concern to us. I have just received word that Disney will dismantle the eyesore permanently. The last remnants of the Millennial Celebration have been swept away…”

I make no secret of the fact that I have never been a fan of the Sorcerer’s Hat at Disney’s Hollywood Studios.  To me, it simply doesn’t belong there.

As originally designed, Hollywood Boulevard is an idealized, classic Hollywood. The Chinese Theater completed the illusion that you were in Hollywood of the 1920s – 1930’s. It was the Movie Palace equivalent of Sleeping Beauty Castle at Disneyland. In fact, the distance from the turnstiles to the Chinese Theater is exactly the same distance as the distance from the Main Street Train Station to Sleeping Beauty Castle in Disneyland.

The Sorcerer’s Hat was originally built as a temporary (yes, temporary) structure for the Millennial Celebrations, and (conveniently) blocked the view of the Theater while some legal issues between new owners of the original Chinese Theater (in the actual Hollywood) and Disney got worked out. It completely shatters the immersive illusion that you have just walked into Hollywood.

Look at this view as it was originally and tell me you aren’t transported to “the Hollywood that never was and always will be.” 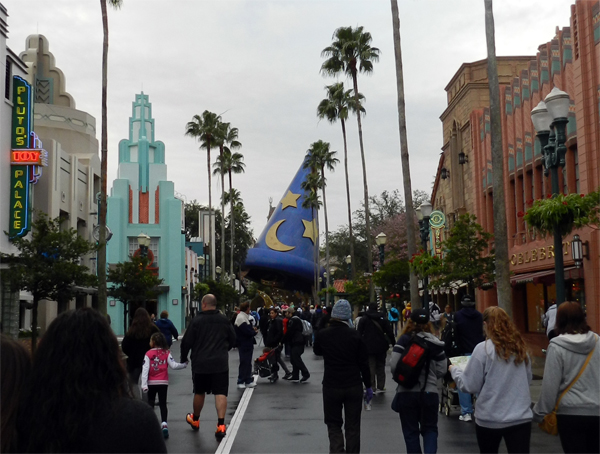 Can you see why I’m happy that the news has become public that they will be dismantling the Sorcerer’s Hat in early 2015?  I’ve been waiting and waiting since last January for the cat to be let out of the bag, and now I am rejoicing.