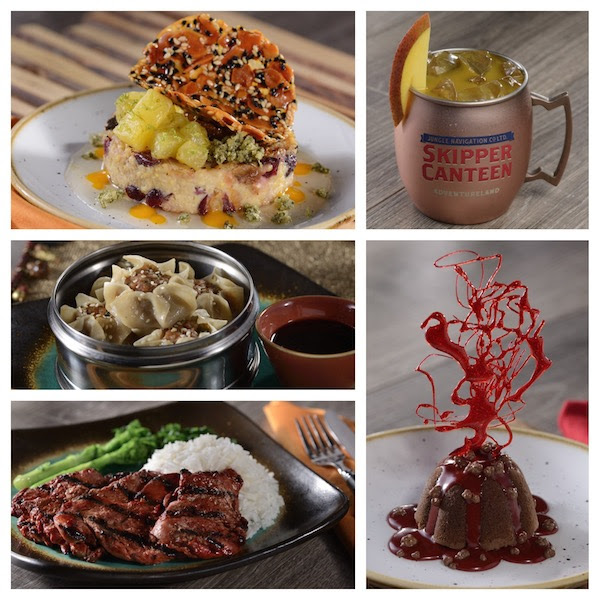 I was pleasantly surprised to see that the Jungle Navigation Co., Ltd. Skipper Canteen (a.k.a. Jungle Skipper Canteen restaurant) was has a “soft opening” this weekend.  Although it won’t officially open until Wednesday, there are already pictures of the food and video of the interior circulating around the internet.  From what I’ve seen so far, it looks fantastic!  I’m especially happy with the menu.

It is different and unique.  While I’m sure it isn’t to everyone’s tastes, I think that is great!  The Magic Kingdom was really in need of a table service restaurant which would shake things up a bit.  I think Disney really delivered and I can’t wait to try it for myself next month.

Here’s the official word from Disney, followed by a video of the interior from my friend John (aka Big Fat Panda):

Located steps from the legendary Jungle Cruise attraction, this new 222-seat table-service restaurant is staffed by the wisecracking crew of the Jungle Navigation Co. Ltd.  Diners are seated in one of three dining destinations inside the company’s headquarters-turned-restaurant: the mess hall; the jungle-inspired parlor once used by the company’s founder, Dr. Albert Falls and his family; or the former meeting room of the mysterious Society of Explorers and Adventurers.

The adventurous menu features bold and flavorful tastes inspired by the exotic flavors of the rivers traveled on the Jungle Cruise. You can try Trader Sam’s head-on shrimp, Dr. Falls’ signature grilled steak or the house-made arepas with slow-cooked beef, black beans, tostones and queso fresco. Little ones can enjoy items such as Junior Skip’s special mac and cheese. And for dessert, there is a Kungaloosh! – an African-inspired chocolate cake served with caramelized bananas and cashew-caramel ice cream. Refreshing non-alcoholic specialty beverages, Punch Line punch and Schweitzer Slush, will also be offered.

The Disney Dining Plan will be accepted at Jungle Navigation Co. Ltd. Skipper Canteen. Reservations are not currently being offered.