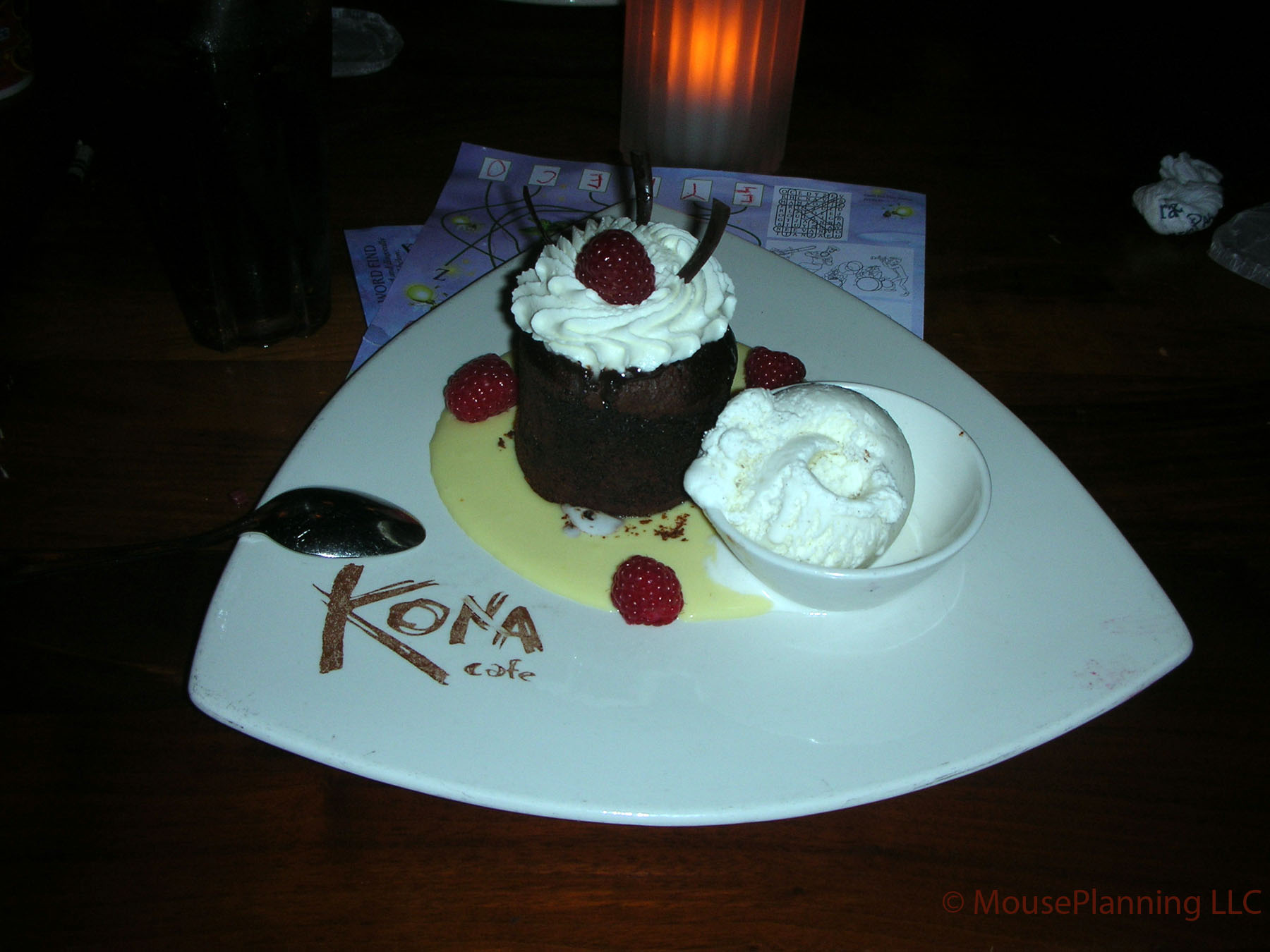 The Kona Cafe, located at the Polynesian Resort, is a longtime favorite restaurant of mine and a couple of weeks ago I was able to enjoy a dinner there with my wife Charity, our baby, and friend Nicole. After spending a fun day in the Magic Kingdom, we hopped on the ferry for a beautiful sunset boat ride to the Polynesian.  The torch-lit walk from the boat dock, past the volcano pool to the Great Ceremonial House reminded me once again how the Polynesian resort is able to transport you into a different and exotic world.

The restaurant is located on the second floor of the Great Ceremonial House. I love the tropical, floral-themed decor and the lighting; it sets up just the right ambiance for a putting a person at ease.  However, with nothing but a short wall separating the restaurant from the spacious and active lobby, the Kona Cafe is not the place to go if you’re looking for a quiet dinner. (I don’t find the noise level to be particularly loud. It is more of an active social buzz that I think encourages conversation as opposed to an atmosphere where you feel you have to whisper to your dining companions.)

After dragging Charity and Nicole away from the awesome display of desserts, we sat down and decided on our meal as we stuffed ourselves with the sweet bread & macadamia nut butter.  For appetizers, I decided to get the Pot Stickers (“wok-seared duck dumplings with creamy ginger-soy sauce”), and my wife opted for the Kona Salad (“mixed greens, blue cheese, fresh fruit, red onions, and smoked almonds with citrus vinaigrette”).  Nicole chose to eat more of the bread.

After some joking about which Disney duck had been sacrificed in order to create the dumplings (we decided it must have been Darkwing Duck since he hasn’t been seen in years), we all agreed that the dumplings by themselves were just okay.  However, the ginger-soy sauce was wonderful!  The Kona Salad was a big hit with my wife, and Nicole had to ask for another loaf of bread. 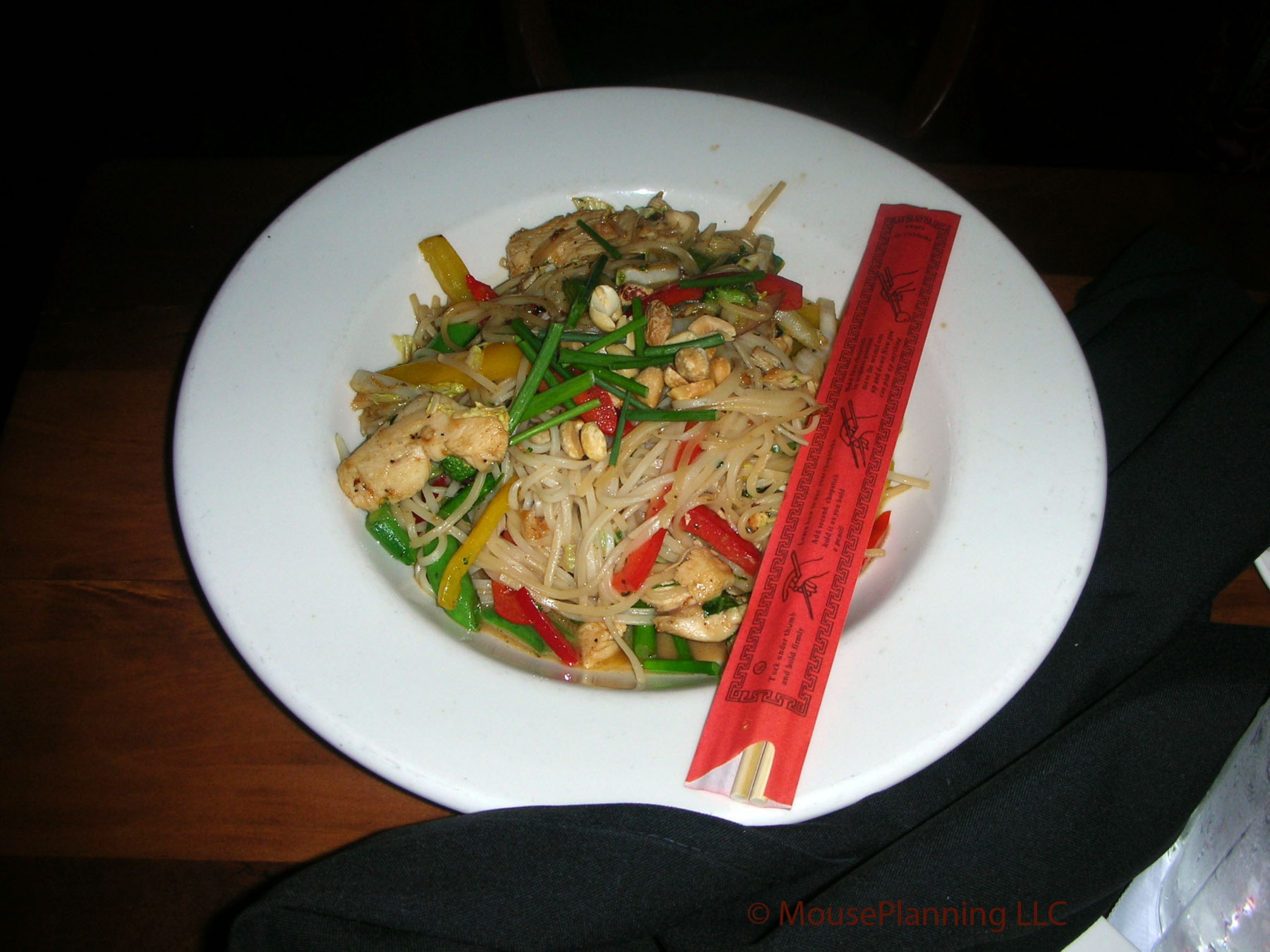 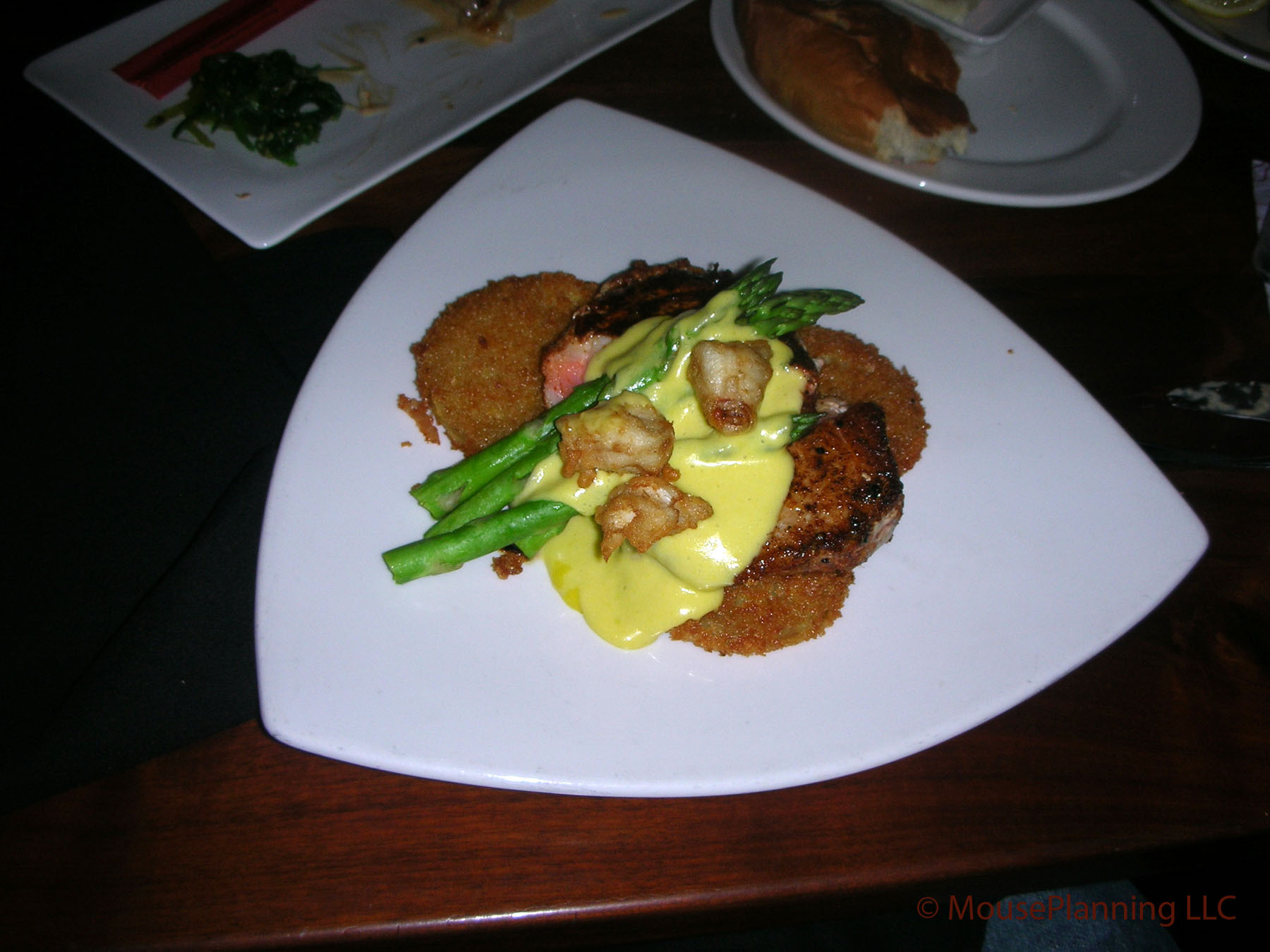 The Tuna Oscar was a great dish! The tuna was excellent, and the fried green tomatoes were near to perfect. The only place the dish came up short was the tempura-fried jumbo crab. While I’m not a big fan of crab (I ordered the dish for the tuna, fried green tomatoes, and hollandaise), even I was disappointed by the puny size of the crab cakes.

My wife’s entrée, the Pan-Asian noodles, was instantly forgettable save for the noodles — they weren’t Asian noodles at all! As far as we could tell, it was spaghetti noodles. (I’m an Irish-Italian American with a heavy emphasis on the Italian.  I know my pasta.)

Nicole’s Coconut-Almond Chicken was another win.  She had said it was her favorite dish on the menu, and after having a bite I could easily agree with her.  The chicken itself was excellent and just thinking about the coconut-almond breading on the chicken has my mouth watering. I know what I’m ordering the next time I have dinner at the Kona Cafe.

And now, I move on to my favorite part of the meal — the desserts.  Charity and Nicole had already decided to each have their own Banana-Chocolate Creme Brulee.  I opted for the Pineapple Upside Down Cake. 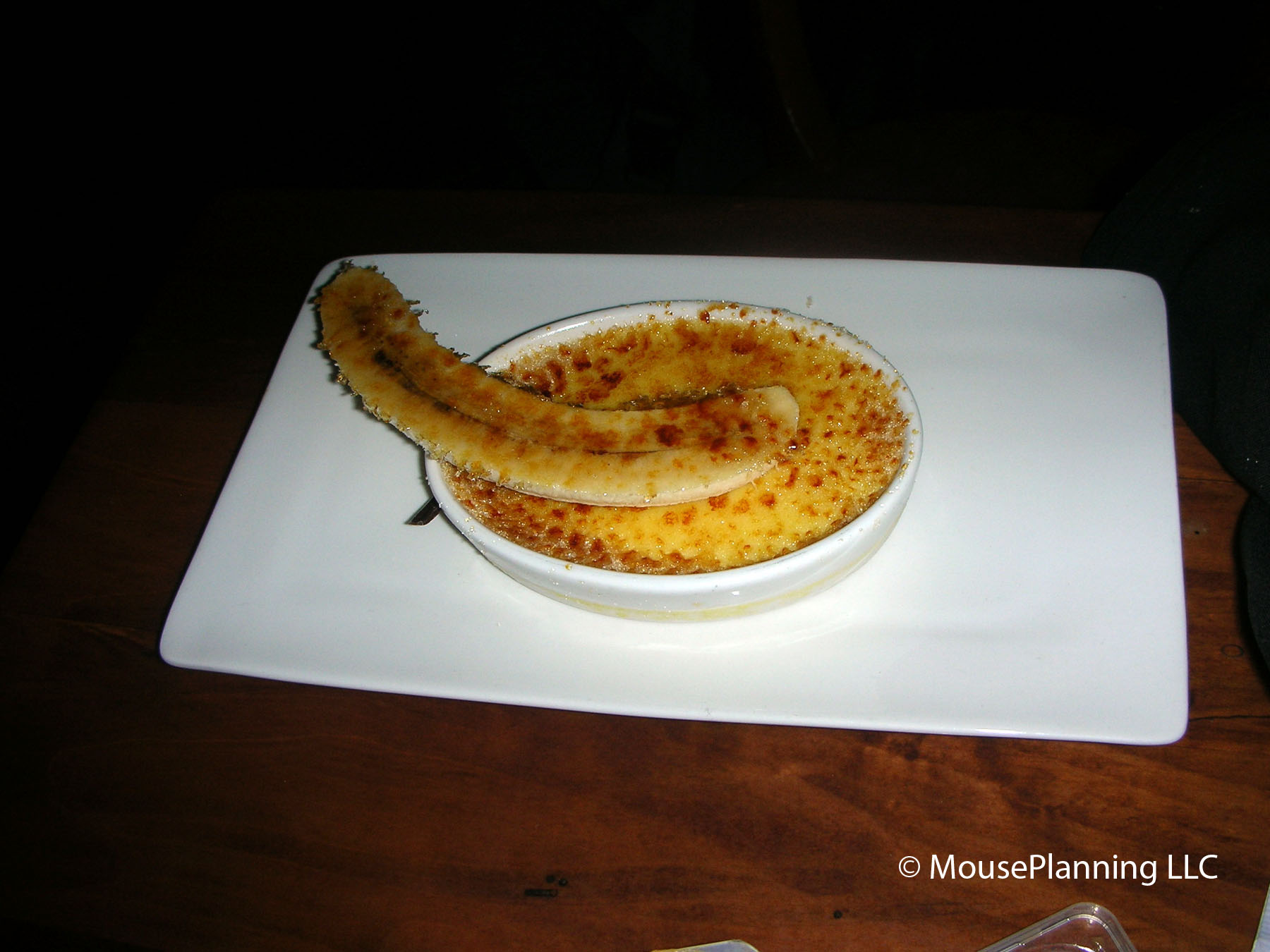 I detest bananas, so I didn’t even ask for a bite of the ladies’ desserts. They were both very happy about that, since they declared the dessert to be excellent.  Apparently, the layer of chocolate under the creme brulee is what really made it so great.  I left feeling a little disappointed. The pineapple upside down cake looked scrumptious and flavor-wise it was exactly what I was looking for.  But the cake overall was too dry and that overshadowed the flavor and left me begging for a glass of milk.

Overall, we enjoyed a wonderful dinner at the Kona Cafe. The food hits outnumbered the misses, and the atmosphere was pleasant as it always is. As we left the restaurant to jump on the monorail back to the Magic Kingdom, I was glad that we had made the choice to dine at the Kona Cafe once more.