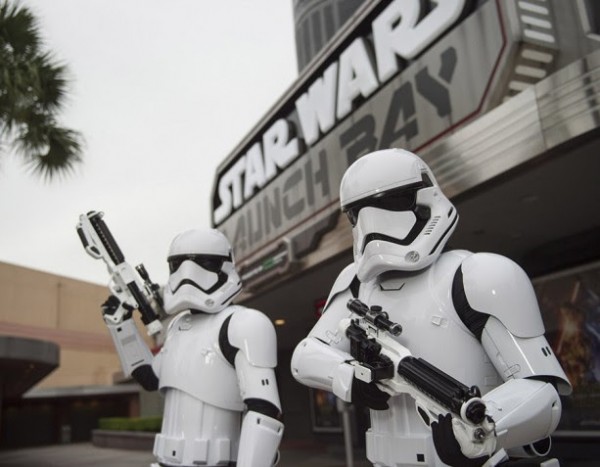 The Force is growing stronger at the Walt Disney World® Resort with the addition of new Star Wars-inspired entertainment now open at Disney’s Hollywood Studios®.

At Star Wars Launch Bay, located in Animation Courtyard, you can interact with Star Wars characters by choosing to encounter the Dark Side in a Star Destroyer themed area, or visit with the brave Rebels in a makeshift Rebel Base. One path may lead to Darth Vader, while the other leads to Chewbacca.

Guests can also visit two different exhibits – Celebration Gallery and Celebration Hallway to view iconic ships from the Rebel Alliance and Imperial Navy fleet, as well as replica Star Wars props and murals. Guests excited for the upcoming film Star Wars: The Force Awakens can head to Preview Gallery to explore an area filled with costumes, artwork, models and more from the new film. And of course, shoppers can get their fix at Launch Bay Cargo, a unique shop that will offer a wide selection of Star Wars merchandise, including original artwork.

This popular attraction, which takes Guests on a daring journey through the Star Wars galaxy, has been enhanced to feature new characters and adventures from Star Wars: The Force Awakens.

Jedi Training: Trials of the Temple

Younglings can get in on the fun over at Jedi Training: Trials of the Temple. This popular offering, which allows young Guests to step into the shoes of a Jedi in training, has been enhanced to feature new characters, including a new villain – the Seventh Sister Inquisitor from Star Wars Rebels.

Star Wars: Path of the Jedi

If you wish to be introduced to (or relive) the adventure and excitement of the Star Wars film franchise you  can do so at Star Wars: Path of the Jedi. Here, you can view an abridged cinematic reel that reviews Star Wars episodes I-VII.

New Star Wars-inspired items have been added to menus at Food & Beverage locations throughout the park. You can enjoy Blue Milk Panna Cotta, Padawan Limeade, BB-8 Lemon and Butter Cream Cupcakes, and much more.

But the fun doesn’t end there. The “Symphony In The Stars: A Galactic Spectacular” nightly fireworks show will begin blasting off Dec.18, 2015. And, beginning Jan. 5, 2016, you can watch the fireworks from a reserved viewing area during a special dessert party – “Symphony in the Stars: A Galactic Spectacular Dessert Party.” You can enjoy Star Wars-themed desserts and drinks. Plus, you’ll receive a souvenir stein featuring one of the most beloved Star Wars characters, Chewbacca. The dessert party costs $69 for adults and $39 for children. Tax and gratuity are included.  Advance reservations are recommended.

Are you ready to experience Star Wars at Walt Disney World?

Click here to begin the journey to your next Disney Vacation!