Rivers of Light to Debut at Animal Kingdom

Here’s the official news on Rivers of Light, followed by my opinion. 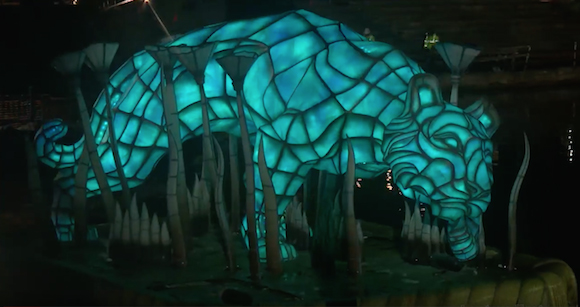 We’re excited to share that “Rivers of Light,” the first-ever night-time show at Disney’s Animal Kingdom® Theme Park, will officially debut at the Walt Disney World® Resort on April 22, 2016.

The show, set on Discovery River in the Asia section of the park, will depict an ancient lantern festival guided by two storytellers who call forth four animal Spirit Guides: an Asian Tiger, Tropical Turtle, African Elephant and Great Horned Owl. These Spirit Guides return at different points during the show to lead the audience through their journey through the Rivers of Light.

Get a first look at some of the illuminated lanterns, water screens, moving fountains and other amazing elements that will be featured in “Rivers of Light” in this video!

My thoughts on Rivers of Light

Let me clarify a couple of things.

First, this is not part of the Pandora: The World of Avatar expansion as I (and others) incorrectly assumed when Disney started construction on the Rivers of Light over a year and a half ago.

In addition to the show, you will notice the park’s iconic Tree of Life undergo an amazing awakening as the animal spirits of the tree are brought to “light” by magical fireflies, revealing moments of wonder and enchantment.

Overall, I believe Rivers of Light is going to do great things for Animal Kingdom.  Already in the past year or so, Imagineering has made little improvements to the visuals in the park which have subtly enhanced the theming to a level that is beyond amazing.  (Walking through Harambe in particular is such a realistic experience; you really get the idea that you are actually in Africa.)  And now Rivers of Light will  provide Animal Kingdom with one of the big things it was sorely lacking — nighttime entertainment.

Ultimately, Rivers of Light and the upcoming Pandora/Avatar expansion are going to be the ol’ one-two punch sequence that will knock you out.