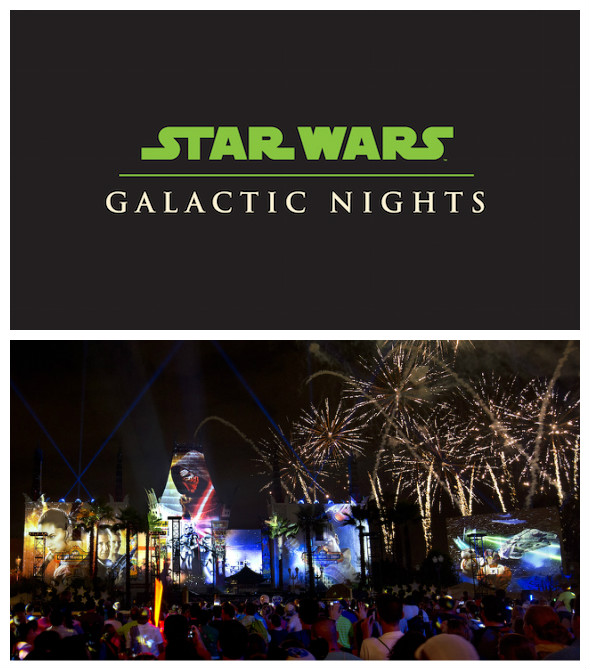 Here’s a taste of what’s on tap for Star Wars: Galactic Nights:

•Rebel Base Activities – The Rebel Base will serve as the event hub with multiple events, hosted shows, and more taking place in the center of the park. The Rebel Base is the stop to see “Celebrate the Saga,” a 40-year history of Star Wars that features rarely seen imagery; you can join in on Star Wars dance parties and more.

•Watch “Inside the Saga: Celebrity Chat Show” – You can catch a celebrity chat show in Epic Theater to learn more about the making of Star Wars films.

•Imperial March & March of the First Order – Darth Vader will lead a battalion of Stormtroopers on a dramatic march down Hollywood Blvd to the Event Stage. Captain Phasma will also lead a unit of First Order Stormtroopers through the park, pausing to give a demonstration of power and strength.

•Seize the Saga Interactive Scavenger Hunt – Event Guests are challenged to collect eight clues in the form of puzzle pieces, one for each Star Wars film, at the party’s various photo stops. Each piece can be affixed to the back of the event lanyard to reveal a surprise.

•“Star Wars: A Galaxy Far, Far Away” – You can watch high-energy clips of the best moments from the film saga juxtaposed with character moments on stage, featuring Chewbacca, Darth Vader, Kylo Ren, and more.

•“Star Wars: A Galactic Spectacular” – The skies will come alive with the power of the Force, as the park’s popular Star Wars-themed nighttime spectacular lights up the night.