One of the things I anticipated most about attending a Star Wars Weekend at Disney’s Hollywood Studios was going to special character meet-n-greet opportunities!  It was great fun, but I have to say that I’m glad that I was by myself on a research trip rather than with my family.  I learned some very important things that will really help me to prepare my kids for what to expect when we go.  I’m going to pass my wisdom along to you!

First of all, special character greetings begin around 10:00am, although specific characters may appear sooner or later.  Regardless, you want to get on line early.  Here I was a solo traveler with nothing to hold me back, so I made sure to get on line as soon as I found out the location of a character I wanted to meet.  I got on line to meet Mickey Mouse in Jedi Knight robes 45 minutes before he was scheduled to appear.  There were already 20 people in front of me by the time I got on line.  About five minutes before Mickey was scheduled to appear, here is what the line looked like behind me: 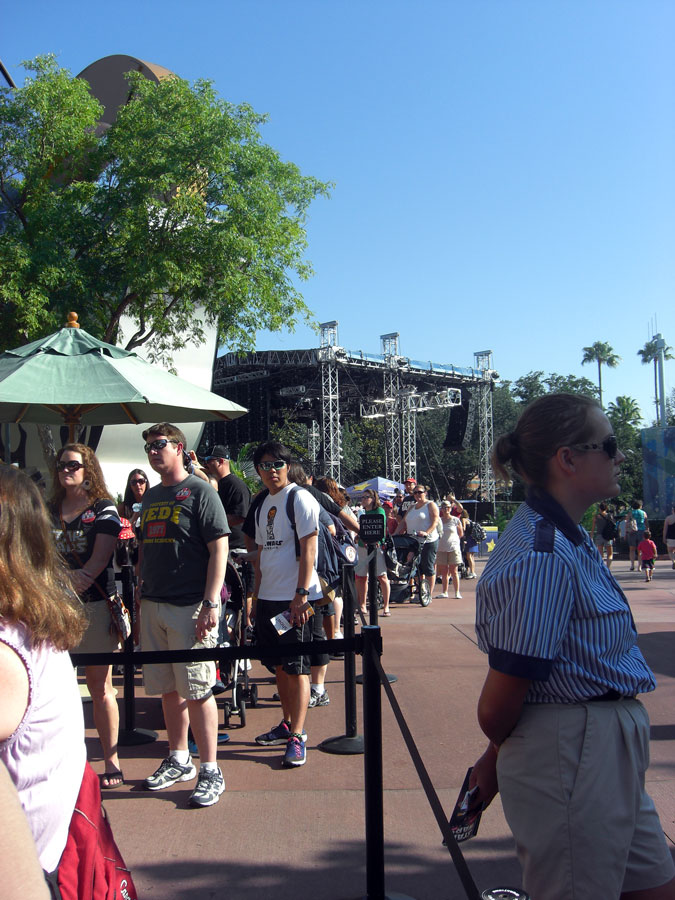 I couldn’t even see the end of the line from where I was standing!  Did I mention that I was basically standing in the sun this entire time?  It was pretty hot and it was only around 10:00am.  But Mickey Mouse finally arrived!  I took a picture of him making his way to the photo location.

The line finally started moving as Mickey greeted the Guests.  When I was about six people away from the head of the line, Mickey took a break.  That is normal and expected.  What I didn’t expect was for Minnie Mouse, as Princess Leia, to arrive five minutes after Mickey left.  The line began to move forward, and I ended up getting a photo opportunity with Minnie instead!

Yes, that’s right.  I waited 75 minutes to meet Mickey Mouse and ended up meeting Minnie Mouse.  That’s when I learned that multiple characters meet at the same location, usually one at a time.  There is no guarantee that you’re going to be able to meet a specific character.  Who you get to see depends on who is there when you reach the front of the line.  In this particular location, I could have met Mickey (as a Jedi Knight), Minnie (as Princess Leia), Donald (as a Storm Trooper), or Goofy (as Darth Vader).  I later found out that there are signs telling you which characters appear and where.

Now, as an adult, it didn’t bother me at all.  However, I’m quite sure my kids would have been extremely upset had they been on line for that long expecting to meet Ahsoka Tano and ending up meeting Ventress.  But it’s all about what they expect, and now I know how to prepare my kids for these meet-n-greets:

1. Arrive early.
2. Expect to wait.
3. Be prepared to wait exposed to the elements.
4. Don’t expect a specific character & be happy with who you get.

That being said, I had a ton of fun meeting the Star Wars characters.  They really play their parts well, some more than others.  (The best, by far, was Boba Fett! I could have watched him greet people all day long.)  I really can’t wait to go back with the kids!