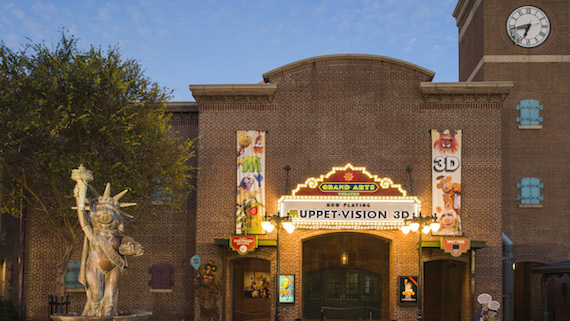 As we’ve previously shared, two new lands – Star Wars: Galaxy’s Edge and Toy Story Land – are currently under construction at Disney’s Hollywood Studios®. But today we’re sharing a look at another area of the park that’s undergoing its own transformation.

Muppets Courtyard, along with a portion of the former Streets of America, is being re-imagined by Walt Disney Imagineering to become a new area called Grand Avenue. Inspired by the revitalization and the vibrant culture of present-day downtown Los Angeles, Grand Avenue is where vintage office buildings and warehouses are being converted to exciting new uses. You will soon see facades for “merchants” appearing in this area for a music shop, loft apartments, a tailor and more, with each window on the street featuring charming displays.

A highlight of Grand Avenue is sure to be BaseLine Tap House. This new corner pub will feature California beers and wines along with a selection of small bites.

The current Muppets Courtyard will become Grand Park, an urban square off Grand Avenue surrounded by shops and restaurants like PizzeRizzo and Mama Melrose’s Ristorante Italiano. You can already see changes in the area, with the Muppets theater being renamed “Grand Arts Theatre” and boasting a brand-new marquee. But, not to worry – Kermit, Miss Piggy and the gang continue to star in their hilarious and irreverent “Muppet*Vision 3D” show.

Grand Avenue will be opening to Guests this fall.