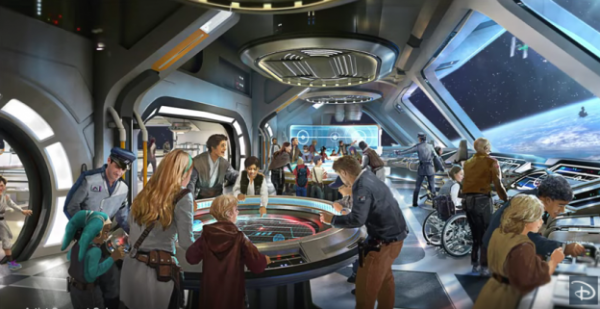 Last summer, Disney announced plans for an immersive Star Wars-inspired resort to be built at Walt Disney World® Resort. Yesterday, we received more details on what this thrilling new resort, which will be seamlessly connected to Star Wars: Galaxy’s Edge at Disney’s Hollywood Studios®, will be like.

This first-of-its-kind resort will combine luxury with complete immersion into an authentic Star Wars story. Guests’ journey through space will start when everyone departs together for a multiday Stars Wars adventure by boarding a starship alive with characters and stories that unfold all around them during a voyage through the galaxy.

At the resort, Guests immediately become active citizens of the galaxy and can dress up in the proper attire. Every resort window will also have a view into space. The opportunity for immersion at this resort will also stand out among all Disney resorts around the globe, as it will be seamlessly connected to Star Wars: Galaxy’s Edge at Disney’s Hollywood Studios, allowing guests a total Star Wars experience.

No dates have been announced for the opening of this new resort, but stay tuned for future updates on this fascinating place!