In September of 2008, I took my family to Disney World and when we returned I told my mother all about the trip.  About a month later, my mother asked me, “James, if I went to Disney World, would you be my guide?” I was doing something else when she asked me this question, and I responded with a distracted, “Sure, Mom.”  About a minute later she asked, “How soon can we go?”

So I arranged to take her to Disney World in November.  One of my brothers wanted to join us, and then my uncle tagged along as well.  On our second night, I had us going to Mickey’s Very Merry Christmas Party.  However, a torrential downpour around 7:30pm, in addition to a day taking them through Hollywood Studios in commando mode, brought my three charges to their limit.  They literally followed the first parade down Main Street and left to go back to our resort.

Of course, I stayed.  I looked like a drowned rat from having ventured out from the Frontierland churro cart to go to the Haunted Mansion before the parade.  It didn’t bother me, though.  I’m from NJ, and even though it was the middle of November and I was soaked to the skin, the temperature was 60°F so I was quite warm.  I decided to walk over to Mickey’s Toontown Fair to meet Tinker Bell, since I had never met her before.  As I passed the old Skyway station in Fantasyland, I saw they had a character meet set up.  However, there were only four people on line, and there was no character there.  I decided to take a chance and get on the line.

In less than a minute, Belle and the Beast arrived.  I felt I had hit the jackpot! Belle is my favorite princess, and I had never met her wearing the red Christmas dress, nor had I ever met the Beast.  I chatted with the people to either side of me in line, and soon it was time to meet the characters.

Belle started talking to me, and asked if I had met her prince.  “Prince?” I asked.  Gesturing to the Beast, she replied with much love in her voice, “Yes, this is my Prince.” 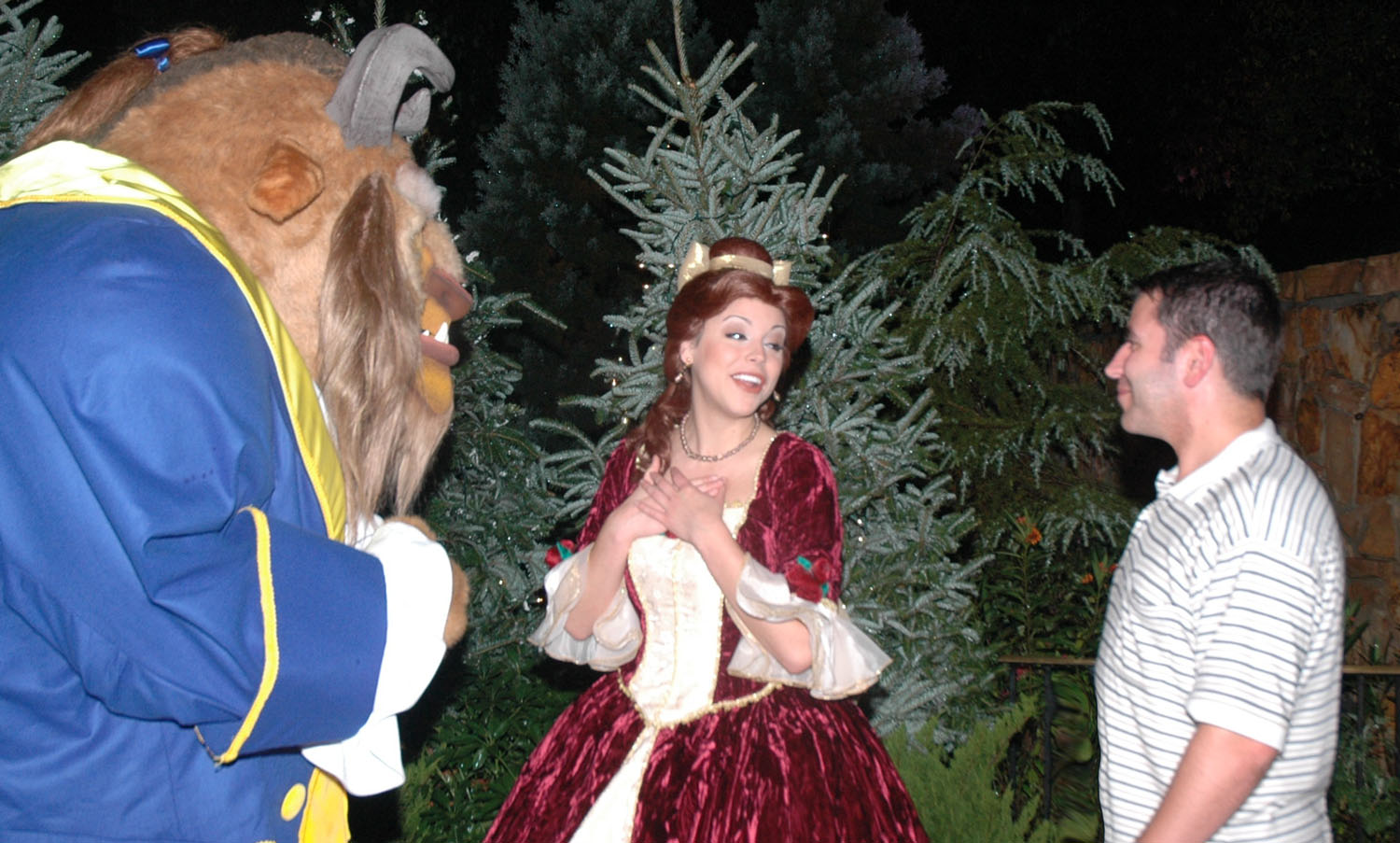 Something in me was disturbed by this emotional pronouncement.  I told Belle, “If I didn’t know better, I’d think that you had feelings for this monster!”

Belle looked a little shocked.  Still, she declared, “Yes, he’s my Prince.  I love him.”

I suddenly turned away from her and faced the people who were still on line.  I shouted to them, “The Beast will make off with your children! He’ll come after them in the night! We’re not safe until his head is mounted on my wall! I say we kill the Beast! Who’s with me?!?”

My impromptu proposal was met with shocked silence. Suddenly, a guy in the line shouted, “I am!”  A gasp emanated from Belle, and I turned around.

“Oh, no! You have it all wrong! He wouldn’t hurt anyone. He’s really kind. And gentle,” implored Belle.

I looked at the Beast, who posed in what might be considered a friendly manner.

“Kind and gentle, you say?” I replied. “Well, then, I guess there’s no reason to worry.” 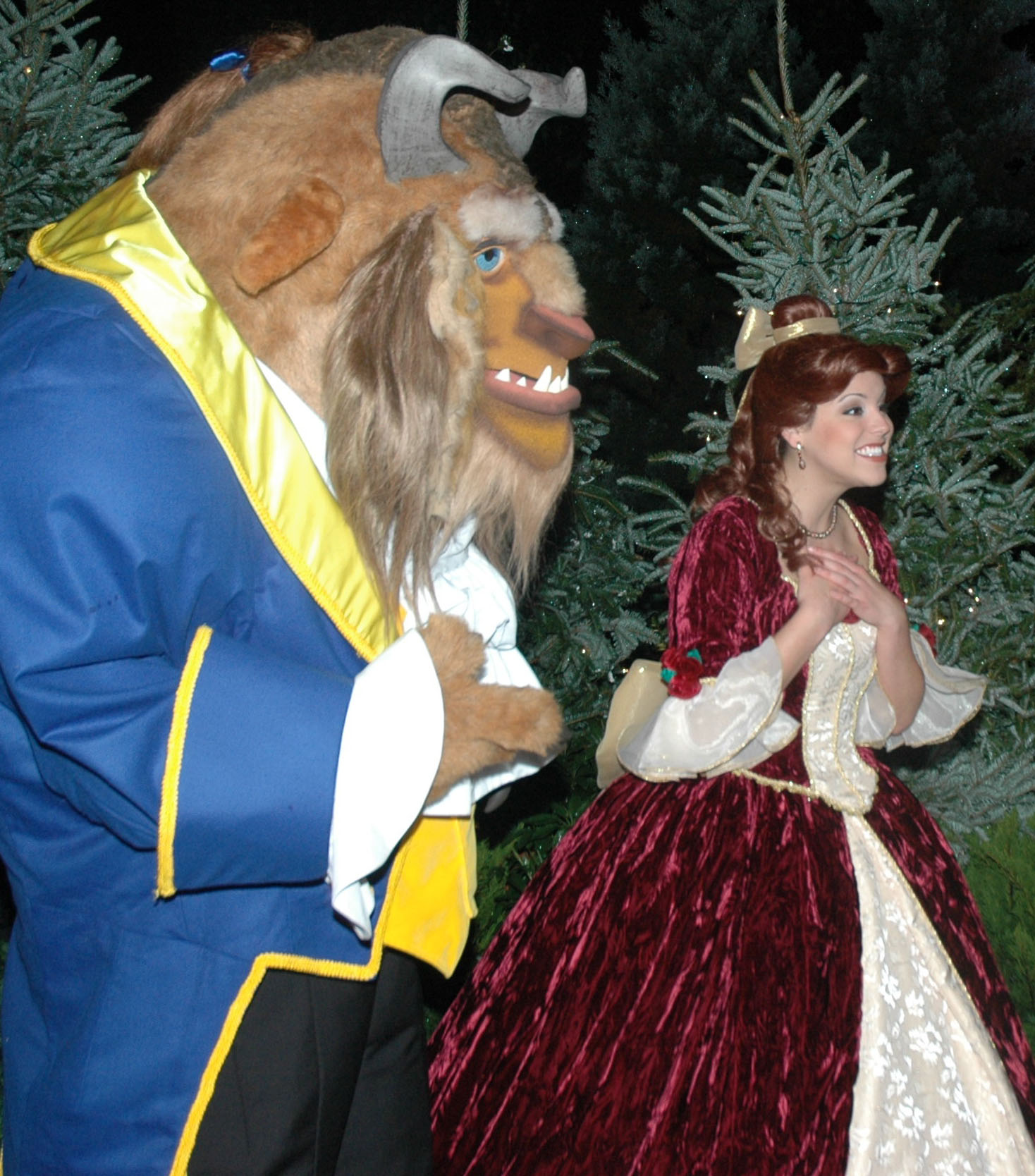 So we let bygones be bygones. I inquired as to what her Prince’s name was.  She told me he is called “Beast.”  I told Belle that he certainly looks like a Beast, but that he must have a real name.  Belle then told me why her Prince was named “Beast.”

“Once he was human and had a name, but he was cursed. It was so long ago, and he’s been a Beast for so long, he has forgotten what his name was. So now he just goes by ‘Beast’ even though he is no longer a beast inside.”

Having learned something new for the day, I decided it was time to depart.  The three of us posed for a picture together. 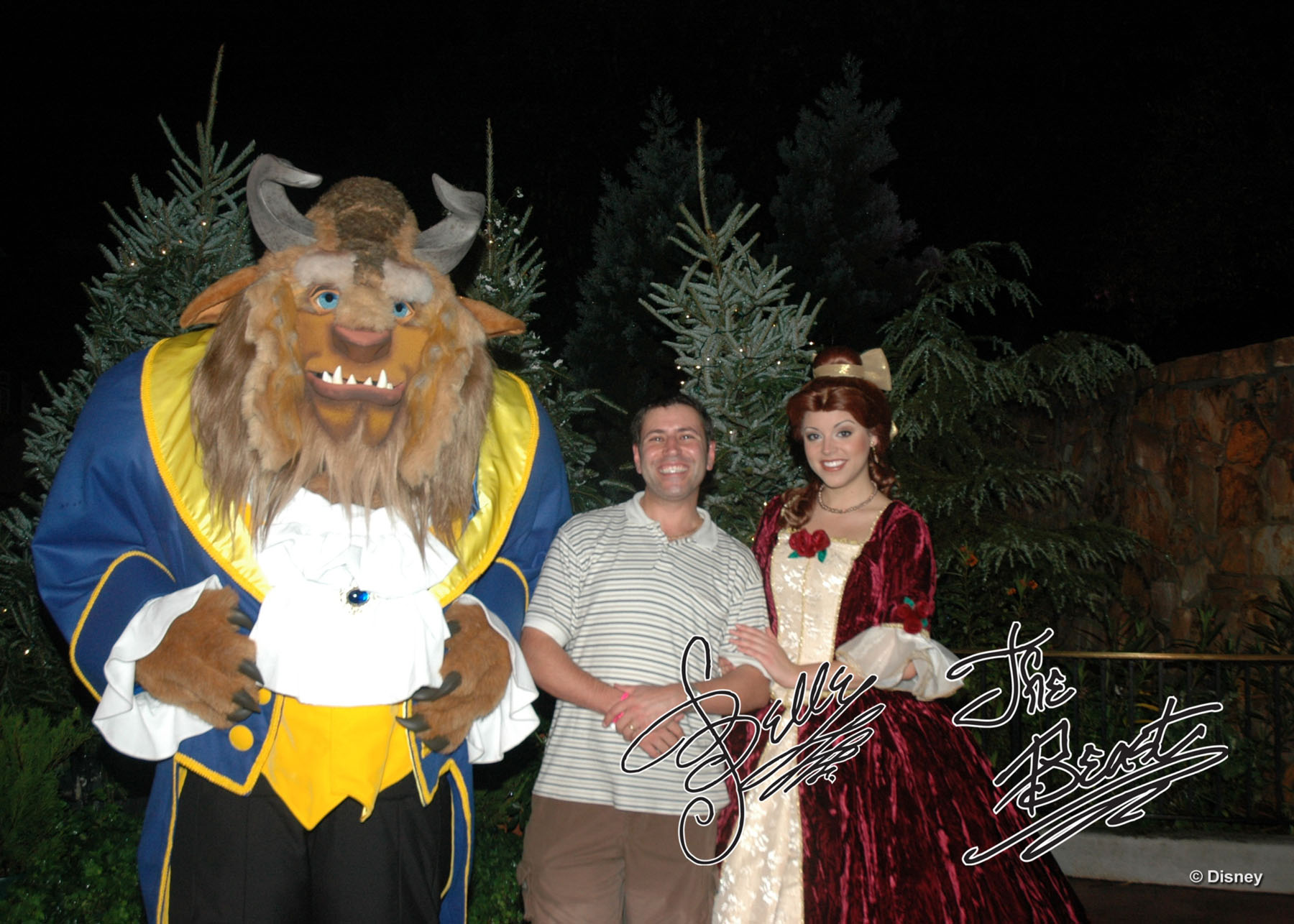 Yeah, I can be crazy like that, but sometimes you just have to have fun with the characters.  Give them a moment to remember.  I have to say that I was impressed with the Cast Member portraying Belle. She took what was (probably) a completely unexpected turn of events in stride. Not only that, she responded with Belle’s exact words from the movie! She really did a great job.

I’m just glad that the Beast didn’t prove her wrong about being kind and gentle. Otherwise, I wouldn’t be here to write this blog post. 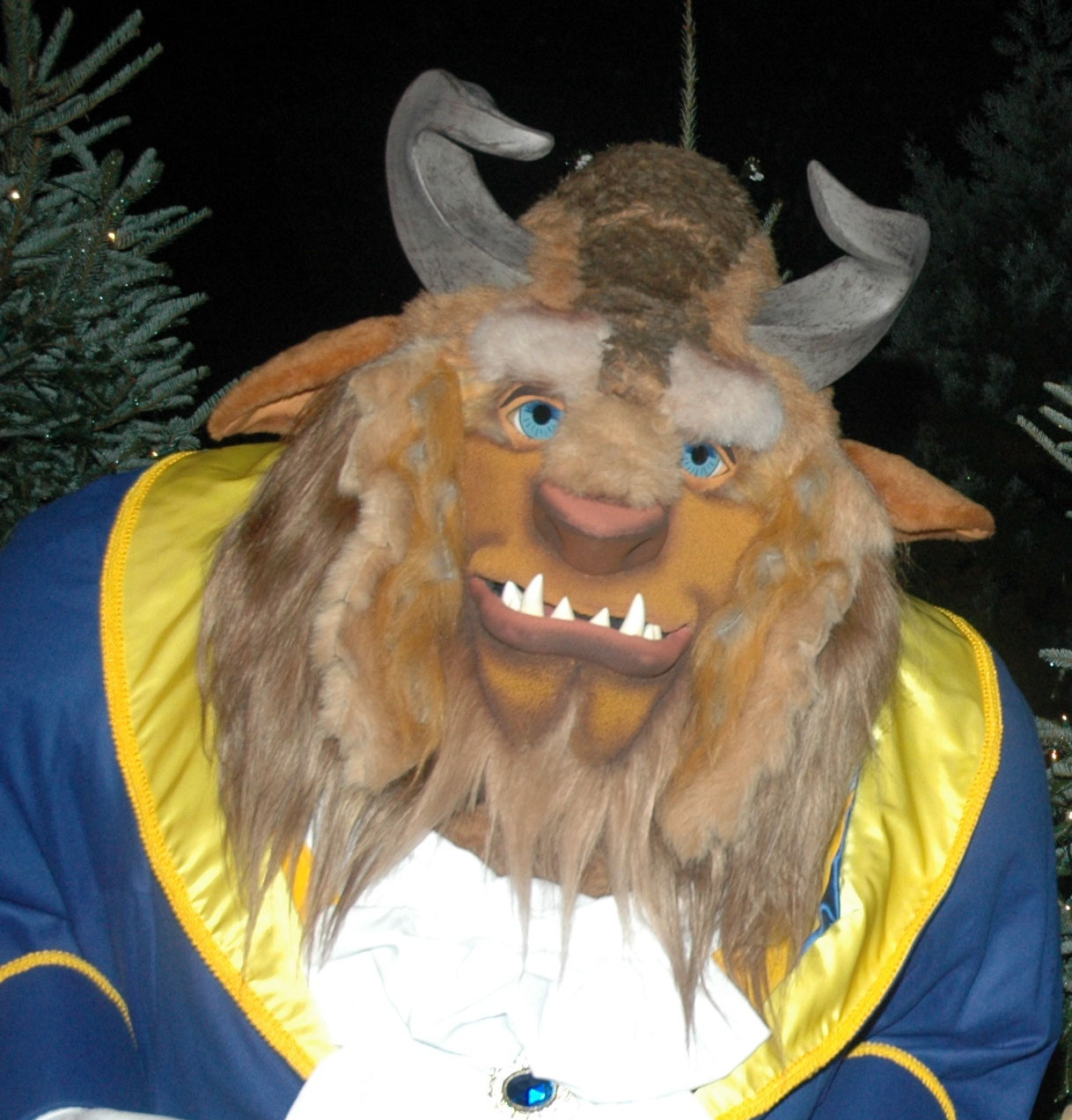